One of the features that Klout.com recently added is the ability to give +K’s to those who have influenced you online.

Giving a person a +K does notÂ currently affect their Klout score but it does help confirm their influence topics and keeps those topics on the user’s list for a longer amount of time.

Klout influence topics are arranged according to the most recent +K’s received.

How to Give +K

To give a +K, first go to the list of topics for that user located on their individual Klout page. 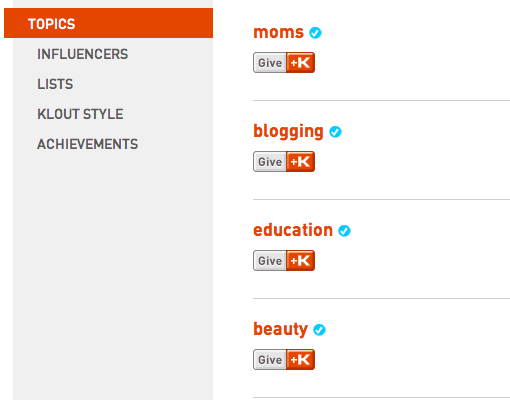 Of the 10 influence topics listed, select the influence topic of your choice by clicking the orange +K button underneath it. After doing so you will receive a pop-up window naming the Twitter user who you gave a +K to and how many more +K’s you can hand out for the day. This box also contains buttons to share your Klout activity via Twitter and Facebook. 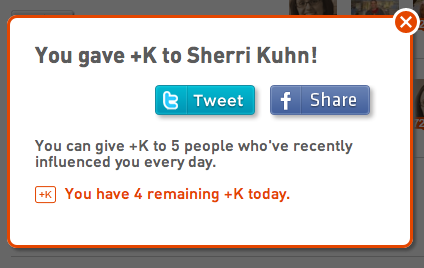 The TweetMeme box will appear. Press the Tweet button again and the tweet is sent to notify the user of the +K.

You have the ability to give 5 +K’s each day to any other user, in any topic that is listed.Â However, you can only give 1 person a +K in a specific topic once every 7 days.

On your personal Klout page, you can see graphs of your Network Influence, Amplification Probability and True Reach. If you’d like to have an idea of how you stack up against someone else, visit their Klout page and scroll down. You’ll notice a chart of side-by-side Twitter and Facebook statistics. 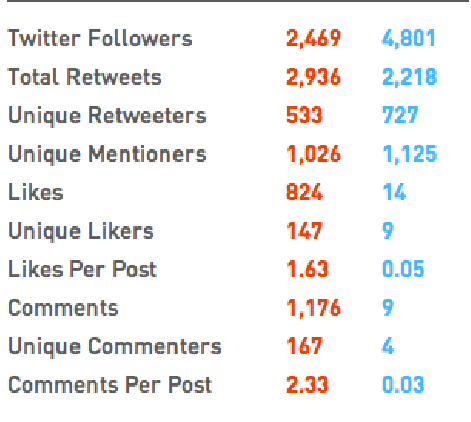 Â Do you hand out +K’s? Have you ever looked at Klout’s analytics for a snapshot of your Twitter and Facebook efforts?

*This is the fourth in a multi-post series explaining the ins and outs of this popular social media reach calculation tool and how it relates to bloggers and small business owners.