Twitter is a social media networking tool and real-time micro blogging platform that allows messages of up to 140 characters to be sent out across the Internet. For those who are new to Twitter, understanding what it isÂ and its terminology is key to getting started.

Twitter users follow people from whom they want to see tweets. You can follow people you know in real life, other social network connections, businesses you love and even celebrities.

It is important to note that it is not required to follow back a person who is following you. Also, it is possible to unfollow a person if you no longer want their tweets in your stream.

Messages sent out are called â€œtweetsâ€ and these are public for everyone to see. While it is possible to privatize your tweet stream, doing so will negatively affect your follower growth, social reach and exposure.

Direct messages or “DMs” are private messages sent between 2 people. These can only be sent to people who are following you.

When a tweet is resent by a user, it is called a â€œretweetâ€ or â€œRTâ€.

When you send a tweet, it is added to the streams of all of the people following you. The exception to this is if you start your tweet with @TwitterHandle.

If a tweet begins with @TwitterHandle, it will onlyÂ appear in the streams of the people who follow both you and the person the message is being sent to.

One way to overcome this is to use a period (.) Â or some other character at the beginning of the tweet, or to rephrase your tweet so that the @TwitterHandle is not the first part of message.

There are several tools available for using Twitter including Twitter.com, HootSuite, and TweetDeck. Each one has pros and cons, which will be discussed in subsequent posts.

Twitter is separated into different streams to make things easier for users.

The public stream (“Timeline”) is where you’ll see all of your followers’ tweets.

The “@Mentions” stream only contains tweets that include your handle.

If you perform searches on Twitter, you can save those searches and later access them from the “Searches” stream.

Also, you can access your direct messages under â€œMessagesâ€ at the top of the page.

Users have the ability to delete tweets, if desired, and can report & block users who are spammers. 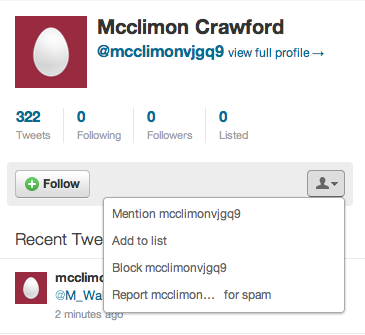 A hashtag is a word or phrase preceded by the # symbol. Hashtags can be used in 2 ways.

In the beginning, Twitter can be a bit overwhelming. But knowing the basic terminology, how to follow a stream and how to compose a tweet gives you what you need to join the conversation.