A funny thing happened last week…The Kentucky Wildcats won the national championship and I wasn’t sure how to feel about it. 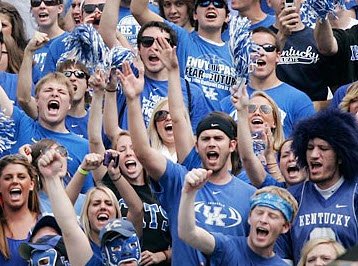 How many of these fans does your business have?

As someone who spends his time helping companies understand customer loyalty, I found my own reaction a bit confusing. After all, I’ve been a Kentucky fan for two decades; I should have been bouncing off the walls.

So in true analytical form, I spent some time thinking about the reasons behind my ambivalence.

I ended up chewing on a question that matters as much to small businesses as it does to huge Division-I sports programs: what does it mean to be a fan?

Think about the average customer base. What you really have is a collection of fans. Unless there’s no viable alternative, your customers can go elsewhere if they really despise you. If they’ve chosen you, if they’ve given you some of their hard-earned dough, there’s at least some goodwill there. So let’s take a closer look at the fan spectrum.

On the one end you have your true diehard fans, the ones who will stick with you through thick and thin. Kentucky has a lot of those â€“ if they played a game in Mongolia half the stadium would be dressed in blue. But most companies don’t have that type of following. We can’t afford to sell lousy products or deliver bad service, or we’ll lose our customersâ€¦ possibly forever. For most of us, the diehard fanatical customer segment is going to be pretty small.

On the other end, you have your bandwagon fans. In sports, put together a winning season and you’ll sell a lot of shirts. In business, put together a good promotion and you’ll fill up your customer database… at least until someone else offers a better deal. Â We’re all bound to pick up some of these customers from time to time, but they’re a fickle and short-term bunch. In fact, the biggest danger is having too many of these people in your customer mix; they’ll suck you dry one promotion at a time.

And then you have the middle ground. For most of us, this is the majority of our customer base. They’re a complicated bunch. They like usâ€¦ but to an unknown degree. They’re loyalâ€¦ but only if we do our jobs well. They’re opinionatedâ€¦ but probably not very vocal. Their needs and preferences and perceptions are constantly shiftingâ€¦ and we have to keep up if we want to hang onto them.

So here’s the challenge for all of us:

As for me and Kentucky basketballâ€¦ well, I’m in that middle ground. I’m predisposed to like the team, but I’m not automatically going to don the blue wig. The 2011-12 team, as spectacular as it was, didn’t have the elements that originally made me embrace the Wildcats.

Quite frankly, I can’t wait for the next UK team that makes me want to stand on my couch and scream at the TV. Most likely, some of your customers feel the same way about you.

What are you doing about it?