At least, that’s the news out of North Korea, where a recent news release confirmed the existence of a lair that once housed a unicorn ridden by King Tongmyong, ancestor of the current leader Kim Jong Un. Actually, they REconfirmed it, since apparently we’d all forgotten that it was there in the first place.

Of course, several experts on Asian politics were quick to point out that this was probably just propaganda. Thank goodness for experts.

In terms of injustices inflicted on North Koreans, this is far from the worst (and I don’t want to make light of that). But the unicorn lair is salt in the wound â€“ imagine the indignity of having to pretend you believe in unicorns because your leader’s great-great-great-grandfather supposedly rode one.

Unfortunately, North Korea’s not the only one making up unicorn tales. You might be too.

For marketers, unicorns are often irresistible â€“ those little gems of hyperbole that seem to help you stand apart from the rest. Harmless little exaggerations, until they go too far.

Maybe they’re baby unicorns, like an airline putting the words â€œdelicious mealâ€ over a tray of what might have been dog food. Or a restaurant promising a hot chocolate â€experience.â€ Or a virtual roller coaster that somehow adds two more dimensions to the four we already knew about. Cute, quirky little unicorns. 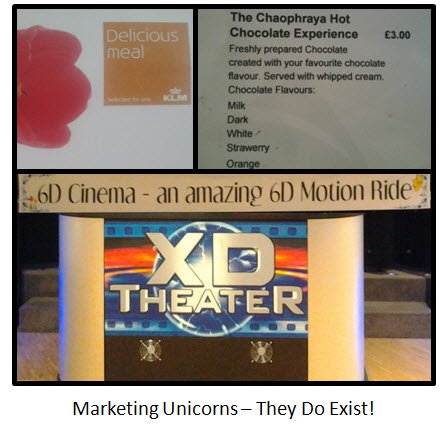 But maybe they’re full-grown unicorns, like sitting on a plane watching a video from the airline’s CEO. While he is promising world-class service, the two scowling flight attendants standing in the aisles suggest otherwise. Or a website that promises â€œone of your best online retail experiencesâ€ but won’t give refunds for lousy products. Or a hold message on your 800 line bragging about your industry-leading product quality to people calling in with product issues. Those aren’t cute any more. They’re aÂ slap in the face.

The point is, your customers aren’t stupid. They recognize hyperbole. They know when you are over-promising. Up to a point, it’s easier to shrug it off or laugh at it. But if the gap between promise and reality gets too wide, you’ll have a problem.

Because unlike North Koreans, your customers can leave whenever they want.