One of the Cool Kids: Abercrombie & Fitch 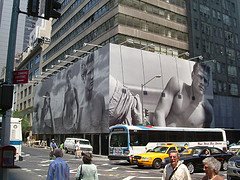 I was never one of the cool kids. I grew up a nerd, with big ears and coke bottle glasses and a better grasp on science and math than sports or fashion. In grade school, I attended a private Catholic school where we wore uniforms every day.

But that doesn’t mean we didn’t have Abercrombie & Fitch kids.

You don’t have to wear the label to embody the attitude.

By now most people have read the remarks from A&F CEO Mike Jeffries about their target audience. Quotes like â€œIn every school there are the cool and popular kids, and then there are the not-so-cool kids. Candidly, we go after the cool kids.â€ He goes on to brag about the exclusivity of the brand in ways most people find appalling.

There’s been plenty of understandable outrage about the quotes, especially in light of the ongoing national discussion about bullying. As an aside, if you were troubled by those quotes that recently resurfaced, the full article from 2006 is worth a read (both because it shows how deeply he means what he says, and because it might remind you of some of Abercrombie’s past controversies).

For the most part, the reactions I’ve seen have been kneejerk disgust. My personal response was to roll my eyes. This was nothing new; it was the same attitude I dealt with throughout my youth as a kid who could never hope to be part of the “in” crowd. But after reading several blogs that approach this from a marketing perspective (among them, Mark Olivito’s take here), I’ve given the issue more thought.

From a strategy perspective, I really can’t find fault in what Jeffries said. His statements were only surprising because people rarely speak the truth so bluntly. Abercrombie IS exclusionary, and aggressively so â€“ every aspect of their branding pushes that message. I can’t imagine any time in my life when I would have felt comfortable in an Abercrombie store. Jeffries’ remarks just served to solidify the exclusivity and snob appeal of the brand: most of the people alienated by his comments would never put on an Abercrombie label anyway, and most of the people who have the Abercrombie worldview either won’t understand what all the fuss is about (think naÃ¯ve Cher from Clueless) or will write it off to jealousy (like the Plastics in Mean Girls or the Heathers in Heathers).

So even though I personally find his attitude despicable and would sooner wear a live badger on my head than be seen in a pair of A&F pants, I think these statements probably helped his brand more than hurt it.

But that’s not the point. What’s most instructive about this case is the fact that Jeffries talks about something that’s more important to all of us than we tend to realize or admit: exclusive marketing. Jeffries has done a good job profiling the customer that Abercrombie wants and the customer they don’t want, and has created a brand that appeals to the desirable customer while repelling the undesirable one. It’s brutally efficient positioning from a guy who understands that having the wrong customers can be a death sentence for an image-based brand or a company.

The trick, obviously, is to be more subtle about it so that you don’t end up making national headlines for your insensitivity. But the more clearly you define your customer, the more clearly you’ve defined your non-customer. Think about Apple’s â€œI’m a Mac/I’m a PCâ€ ads â€“ similar mentality to Abercrombie, just executed more delicately.

You’ve hopefully already figured out which customers you want, and you’ve taken steps to brand yourself in a way that appeals to those customers. But have you thought about who you don’t want as customers (particularly if they are people who could be damaging to your brand) and what you can do to keep them away? If not, take the Jeffries challenge. Think about the customers who, if you had enough of them, would sink your company: maybe because they are high-maintenance, or have demands that you are not well-suited to meet, or are abusive, or constantly nickel-and-dime you. Build a profile of your ideal non-customer, and then try to develop a strategy to keep them away.

Just don’t be a jerk about it, okay?