How to be a Customer 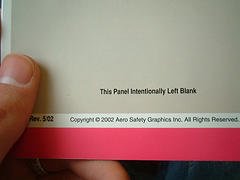 I see some weird things on airplanes.

I’ve seen a belligerent drunk get hauled off the plane by police after refusing to follow a flight attendant’s instructions.Â  (Then, about 30 seconds later, the woman who was seated next to him sighed, muttered â€œwell, I guess I’d better go with him,â€ picked up her bags, and trudged down the aisle.)

I’ve seen a woman in her late 50s who didn’t speak a word of English, wearing a t-shirt with the words SEXY BITCH in fluorescent letters visible from across the gate.

I’ve seen a woman throw a bag of peanuts at a whiny child (not hers) who was complaining about being hungry.

And a couple weeks ago, I witnessed one of the most clueless travelers I’d ever seen.

I noticed Clueless before takeoff, seated across the aisle and a couple rows ahead of me. He was a young man, maybe 20, fidgeting a lot, looking around, acting nervous. He stood up, took his jacket off, and sat back down. I watched as Clueless crumpled up his jacket, then tried to stuff it under his own seat. Not the seat in front of him, but the space under his own seat, which was occupied by a pair of feet belonging to the woman sitting behind him. Clueless turned around and asked her, â€œMy jacket isn’t bothering you, is it?â€ The poor woman was so taken off guard she just shook her head.

As we pulled away from the gate and started taxiing, I turned my attention to my files, laying out the papers I was going to work on during the flight. That’s when I heard a thump-thump-thump sound that I hadn’t heard in years. I looked up and saw Clueless holding a can of dipping tobacco, banging the can with his thumb to pack it. I thought, â€œno, there’s no wayâ€¦ surely he won’tâ€¦â€ but he did. Clueless opened his can of Skoal, filling the cabin with the acrid minty smell of moist snuff, then took a huge pinch and tucked it into his lip.

We made it to the end of the runway and started our takeoff run. Just as we reached about halfway down the runway, our speed building, I heard a phone ring. Of course, Clueless answered, and as we climbed to 10,000 feet we listened to him just chatting away, completely oblivious to the incredulous looks he was getting.

Over the next 45 minutes on our Memphis-Atlanta flight, those seated near Clueless were treated to the sight of a clear glass Snapple bottle slowly filling up with tobacco spit. A few glances at other passengers seated nearby revealed a common sentiment: WHAT THE #%@#$^???

Fortunately the flight ended before he ran out of capacity.

Walking off the plane, I thought to myself, â€œHow could he think that behavior was acceptable?â€ But then, after some reflection, I realized he probably just didn’t know any better. As much as I’d like to think that everyone has a baseline sense of proper behavior when it comes to flying, I’ve seen enough bare feet propped up on seats to know better.

This is an extreme example of a common occurrence. There are plenty of people who don’t know how to behave in a given situation.Â  Whether we realize it or not, there’s a learning curve with everything, from checking in at a hotel to using a software application to eating at a nice restaurant. When you don’t notice the learning curve, it’s usually because someone has gone to a lot of effort to make the process intuitive.

Most customers figure out how to adapt, learn what to expect, and fall in line. But the ones who don’t learn can be problematic. Not only do you lose them as customers, you run the risk of losing other customers and prospects that they alienate along the way.

What’s the problem? We’re so used to what we do and how we do it that we sometimes forget to educate our customers on how to be customers. Or we do it in ways that most people tune out (like video tutorials, FAQs, or a faded sign on the wall) instead of spending real time and energy to help customers learn what’s expected of them and what they should expect from us.

So the next time you catch a customer doing something unexpected, or odd, or flat-out wrongâ€¦ don’t point the finger at them too quickly. Instead, ask yourself if there’s something you should do to keep it from happening again. Maybe you can’t make people stop being weird, but you can turn weirdos into good customers.