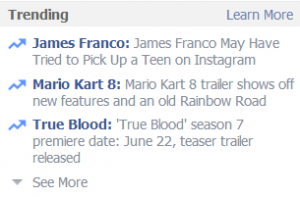 It’s no secret that Facebook is attempting to become more of a news source. RecentÂ Facebook algorithm changes prioritize news updatesÂ over shared memes or jokes. In fact, they’ve also started to promoteÂ posts that tag major brandsÂ to audiences of both the page posting the status and the page tagged in the status. Of course, this really only impact big brands. But it shows that they are actively prioritizing “big” news over smaller updates that may be more targeted.

There’s much speculation that this is an effort to compete with Twitter. Personally, I think there’s merit to this argument. I often find out breaking news first on Twitter. When the Boston Marathon bombing occurred, I found out in moments because it was on Twitter. It was on Twitter before it was on my TV.

In an effort to become more of a news source,Â Facebook added trending topicsÂ (likely also an effort to compete with both Twitter andÂ Google+). I’ve been watching these trending topics and they appear to be largely filled with celebrity news. While Fort Hood recently (tragically) trended, the topics themselves still seem to me rather sensational as a whole.

I’ve found little value from aÂ newsÂ perspective to Facebook’s trending topics. But, for me, it’s been a great alternative to TMZ and the like. As a busy small business owner, I rarely have time to catch up on celebrity gossip. But now, Facebook is adding it to a platform that I’m already regularly on.

I wouldn’t mind getting actual news from Facebook. I wouldn’t mind getting the updates I actually subscribed to rather than the updates their algorithm thinks I should see. I wouldn’t mind no longer seeing ads for pages I already like (but from which I only see these promoted posts due to Facebook’s algorithm changes). What I do mind is seeing celebrity gossip trending as news. I don’t really need click bait shoved in my face.Â As a whole, it’s made me sad for celebrities likeÂ James FrancoÂ who find themselves embroiled in alleged scandals.

Facebook is likely seeing an increase in engagement due to these trending topics. It’s hard not to click to see what the latest scandal is. However, I’m unsure this feature has really moved them closer to being a news source.

Have you found value to your Facebook trending topics from a hard news perspective?