Business Lessons from a California Gurl

I have a confession to make: I went to a Katy Perry concert.

And I was right. 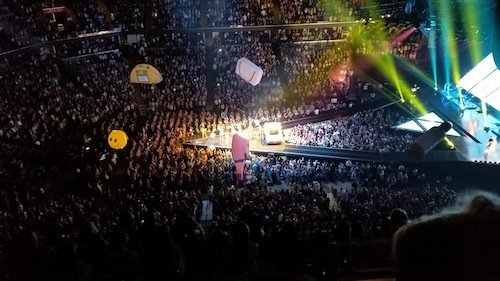 (My last trip to the FedEx Forum was for the Eagles, a great show in its own right, but not even Joe Walsh was going to strap himself to prop balloons and â€œfloatâ€ around the arena â€¦ seriously, like 50 feet up in the air.)

And in the midst of the flashing lights and the pink and the sparkly and the fuzzy and the general cotton-candyish spectacle of it all, she did a few things that made her stand out not as a performer, but as a businessperson.

She made a personal connection. Early on, she found a way to bond with the audience.Â  Her appearance on ESPN’s College Gameday a day earlier had already endeared her to the Ole Miss contingent (and a couple â€œHotty Toddyâ€ mentions during the concert helped), but she went beyond that. She told us, among other things, that her father was married on the roof of the Peabody (a Memphis landmark). A little random, but it was specific and genuine.

She had advocates paving the way. Her opening act was Tegan and Sara, a very talented duo in their own right. A Tegan and Sara show usually has a lot of entertaining back and forth banter, but they dialed it down when they opened for Katy. They weren’t there to promote themselves, they were there to promote her. So they talked about how much we were gonna love Katy, they dedicated a song to Katy, they were Katy’s biggest fans. They put aside their own egos and agendas and did their jobâ€¦ introducing her.

She was transparent with her business relationships. Halfway through the show, she sprinkled some magic dust into a trapdoor garden and grew â€¦ a Ferras. (This all made sense at the time, kind of.) Ferras was some guy with colored dreads who subjected us to a mediocre pre-opening show that helped pass the time until Tegan and Sara came on. His reappearance mid-show was a surprise â€“ apparently in Nashville her garden grew a pizza for some lucky fan, but we got a Ferras instead. All of which made MUCH more sense when Katy explained that Ferras was a long-time friend of hers and the first artist she signed to her new record label. Then they sang a duet before he disappeared again. Sure, it was blatantly self-promoting, but she was upfront about why she was doing it.

So there you have it. Three important reminders from Katy Perry on how to conduct business.

Or maybe I’m just telling myself that so I feel less guilty about enjoying the show.