Google+ gets a bad rap.

“None of my friends/customers are there!”

To which I respond, “When’s the last time you took a look at Google+? Have you done any searches to find other users or Google+ Communities that fit your niche?”

Yes, Google+ doesn’t have near the number of users as Facebook. It also doesn’t have the impossible algorithm, the clutter, the game requests, or the ads that Facebook does. A Google+ Business page doesn’t have the limitationsÂ that a Facebook Fan Page does either (Yes, you can actually interact with individuals as your business page; you don’t have to wait for them to come to you!).

Even better, Google+ is owned by Google, therefore tied to search rankings. As an always-signed-in Gmail user, it’s rare that I complete a Google search without seeing at least 1 Google+ update in my results. 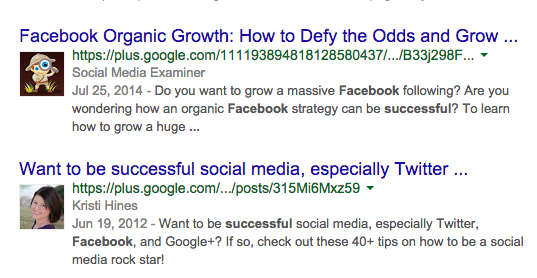 A Google search for “How to be successful on Facebook” brings up 2 Google+ results in Page 1 search results.

I think you’d be amazed at the amount of niche Communities on Google+. Foodies, travelers, home schoolers, horse owners, fans of “Walking Dead”. Heck, even Justin Bieber has a cult following on Google+!

Notice that the Community on the left has nearly 150,000 members? And that’s just 1 Community.

The thing about being active on a “less popular” social media platform is that the people who are there really, really want to be there to connect with other like-minded individuals. This one point alone makes Google+ stand out from Facebook, which is the “starter”, default platform for most people.

And this leads me to my next and main point in this post. Once you’ve spent a fair amount of time on Google+ posting and engaging with other users, you’ll find that Google+ is like a perfect marriage between Twitter and Facebook.

Because Google+ updates are similar in look, style, tagging of other accounts, liking, commenting, and sharing as Facebook updates, yet the amount of updates posted by a Google+ account in a single day, the amount of resharing of others’ content, the use of hashtags, and the ability to segment those you follow into smaller, specific groups is much more like Twitter. You also tend to find that conversations continue on for a longer period of time on Google+, which is much more akin to Twitter conversation threads.

Here’s one example of a Google+ update posted by my friend, Ian. You’ll notice that it received 26 +1s, 29 comments, and 4 Shares. In reading through the update, I think you’ll be amazed at the length and depth of individual comments. You simply do not see this type of conversation happening on Facebook fanÂ pages.

I was tagged in one of Ian’s follow-up comments, which pulled me in to then add my 2 cents to his thread.

So as you continue to assess your online presence and consider your social media strategy, I’d recommend giving Google+ a fair chance. Put some consistent effort into it on a weekly basis for at least 3-4 weeks in a row, and see if you see the types of things I’ve covered in this post.

And then enjoy all the “Facebook-Twitterness” that Google+ has to offer!