Business Lessons from a Root Canal

â€œOh yeah, we can fix that right up,â€ my dentist said as he poked my throbbing tooth.

Phew, I thought, that’s a relief.

â€œYou just need a root canal. Give me just a sec and we’ll get started.â€

WAIT, WHAT? A ROOT CANAL? LIKE, RIGHT NOW??? Now, I’ve never been a bad dental patient. I’ve almost fallen asleep in cleanings. The sound of a drill doesn’t bother me. But this? Everyone knows a root canal is awful. It’s one of those things people use to reassure you that whatever’s happening to you, it could be worse. It could be a root canal.

So that’s how my first root canal started. And an hour later, with the first phase of tunneling complete, I thought to myself, that wasn’t so bad. I guess the bad part comes next week. I even asked my dentist at the end of the procedure, â€œSo when is the part that hurts so much?â€ He just chuckled and patted me on the shoulder as he walked out. He thought I was kidding.

Fast forward: a week later, I’m back in the chair to get phase two done. More drilling, then poking, then digging around. A little blood, a few uncomfortable nervy twinges, but still not the white-knuckled anguish I’d been led to expect. Heck, I even snuck a selfie (a toothie?). 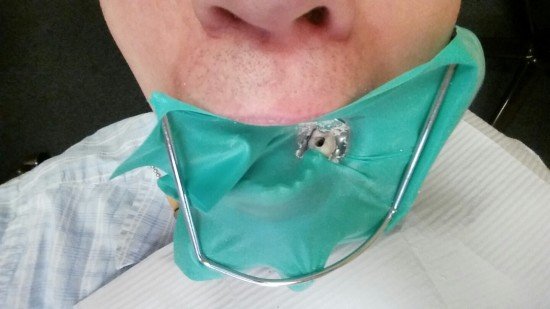 As I sat in the chair, listening to the drilling and scraping, I thought about my experience. I’d been apprehensive because I knew nothing about root canals except how awful they were supposed to be. In the absence of personal experience, my assumptions fed my expectations. Reflecting on that, I realized I’d witnessed a case study in onboarding first-time customers, one in which my dentist had disregarded several important rules:

In another week, I go back for my third and final trip to wrap up my root canal. I’m not nervous at all any more, and the only thing hurting is my wallet. If I ever have to have another root canal, I’ll probably shrug it off and not even bat an eye. But that’s only because I have my own experience to draw from.

There’s a saying that you only have one chance to make a first impression. Take a minute to think about how you treat your new customers, and what you do to make them comfortable and familiar with you. Do you know what assumptions they bring into the relationship, and whether those assumptions are accurate? Do you do enough to understand their perspective and address their needs and concerns? Do you follow up with your first-time customers after the fact to see how you’ve done?

If not, take the time to listen and understand. There’s no better way to turn a first-time customer into a long-time customer.