The Only Question That Mattered

We’re calling it the world’s most expensive strep test.

Saturday morning, our five year old stumbled out of his bedroom in tears, complaining of a headache. Two junior Tylenol didn’t make a dent, and a cool dark room didn’t seem to soothe him at all, so Grandma the RN was called in for an exam. â€œHe should be okay,â€ she concluded, â€œas long as there’s no nausea.â€

Fast forward three hours. After an abnormally long nap, he staggered out of his room, sat in my lap, mumbled â€œmy head still hurts, and I don’t feel good,â€ and proceeded to throw up on everything in a three foot radius. (I’m kind of a magnet for this with all three kids; if I ever write a book about being a dad, I’ll probably title it Please Stop Throwing Up On Me).

So now, alarm bells are ringing, Gran the nurse and Grampa the retired doc are consulted, the pediatrician is calledâ€¦ and everyone’s in agreement that immediate medical care is needed.

If this had been sniffles, or a fever, or a standard-issue stomachache, we would have gone the urgent care route. But this was a severe headache with nausea, and since he’d had a bump on the head a few days before, it could have been something much more severe. So off to the ER we went!

In the ER, they shared our concern. But before they did anything else, they pointed to the wall and asked my son one question: How bad does it hurt?

Then, after drawing blood and doing a strep swab, they whisked us off to do a cat scan. After all the tests were complete, they asked again: how bad does it hurt?

Then, finally, a couple hours after we were admitted, he finally got some medicine for the headache. And slowly he got to be himself again, going from a blank stare to giggling at cartoons on TV. And again, after the medicine had a chance to start working: how bad does it hurt?

Finally, results started coming in. Bloodwork showed an infection. Cat scan showed minor sinus inflammation, but nothing scary or brain-related. Strep test came back â€¦ positive. We had our culprit. One awfully painful shot (straight into the leg muscle â€“ouch!) and 30 minutes of observation later, we were released back into the wild. With one more: how bad does it hurt?

So that’s how the world’s most expensive strep test came to an end. It’ll be a while before we get the bills, but we’re already dreading them. That said, we knew we made the right choice based on the symptoms. If we’d gone the urgent care route and just relied on blood tests and strep swabs, we probably wouldn’t have been confident that strep was the only issue at play.

Anyone who has had a child in pain knows that as a parent, you’d give anything to bear that pain yourself. In the absence of that, you’d do whatever you could to relieve the pain. So as methodical (and downright slow) as the process was, I appreciated that the ER shared my focus on his pain level.

As I thought more about my experience, and my son’s, I kept coming back to how important it was that they kept asking that question. Being a numbers guy myself, I was plotting a graph in my head the whole time (which won’t be a surprise to anyone who knows me). Revisiting that pain scale throughout the experience was a good reminder of why we were there to begin with, and as his distress subsided so did my anxiety. 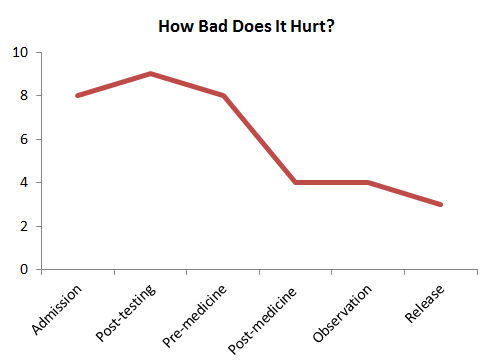 Whatever your business, this is a good practice to adopt. Your customers come to you because they have a problem and expect you to solve it. So figure out the primary problem you are solving. Boil it down to one question you can ask, with meaningful and trackable answers. Ask the question. Ask it again. And again. And most importantly: pay attention to the answers and how they change over time.

You don’t need to think about it as research, or analytics, or metrics. It’s just listening. And it’s the only way you’ll know whether you’re solving the problem your customers need you to solve.