A piece of advice: don’t park in the bike lanes in Vilnius, Lithuania.

Tired of complaints about illegal parking, the city’s mayor decided to do something dramatic.Â  The result may be the best Public Service Announcement ever produced: the mayor crushing an illegally parked Mercedes with a Russian armored personnel carrier. 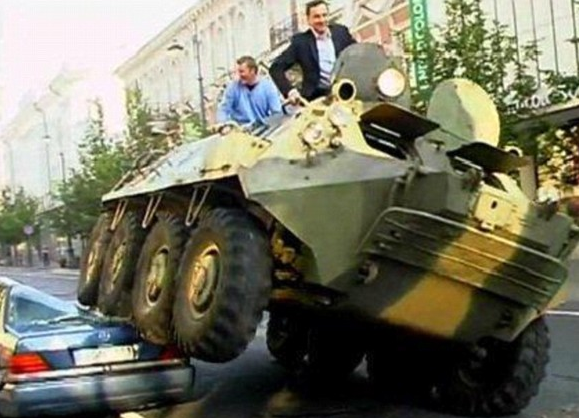 The mayor gets his point across.

Yes, it’s staged.Â  But it sure gets the point across.

As does this video of Trent Kimball, a man who stands behind his company’s product â€“ literally.Â  Trent is CEO of Texas Armoring Corporation, and the product is bulletproof glass.Â  To show how much he believes in what he sells, Trent sits behind a bulletproof windshield while an employee shoots at him with an AK-47.

Unfortunately, these dramatic flourishes don’t always have the desired result.Â  ConAgra found this out when they tried to follow in the footsteps of Folgers and Pizza Hut with the old hidden camera trick.Â  Food bloggers and mom bloggers were invited to a special private dinner that turned out to be a â€œguess what you’re REALLY eating!â€ switcheroo.Â  Instead of freshly prepared dishes, guests were served Marie Callender’s frozen lasagna and pie.Â  Not surprisingly, some folks were pretty unhappy about being conned.Â  And as you might imagine, they were pretty vocal about voicing their displeasure to their readers.Â  Whoops.

Destroying cars, getting shot at, duping bloggers.Â  You probably don’t have any of these things on your to-do list.Â  But if you’re looking to differentiate, you’re probably toying with doing something outside your comfort zone.Â  Maybe it’s gag gifts for clients, or an edgy direct mail piece, or a silly referral campaign.Â  Maybe it’s a rebranding or a co-branding or a line extension.Â  Whatever it is, kudos to you for shaking things up.

Just remember to keep your target market in mind.Â  Align your strategy with what’s important to them.Â  Think about the examples above:

There’s nothing wrong with a little drama.Â  Just don’t forget about your audienceâ€¦ or you may end up performing to an empty theater.