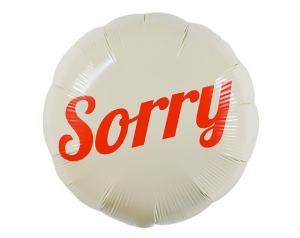 Before this month, you probably didn’t know his name (unless you’re an NBA fan or a fair housing advocate). But if you’ve turned on the news in the month of May, odds are you know something about the story. The racist comments caught on tape, the outrage, being banned from interactions with the team he owns.

This post isn’t about any of that. There’s plenty of media coverage of every aspect of that mess.

No, I’m focused on one thing: the â€œapology.â€

In the wake of the scandal, someone convinced Sterling he should go public with his side of the story. His attempt was so disastrous that the Commissioner of the NBA felt it necessary to apologize for Sterling’s apology and reassure the public that the NBA was working quickly to boot Sterling from the league.

There’s a lesson to be learned here. Not about harboring controversial views, not about sharing those views, but about the art of the apology. And it’s a lesson we all need to be reminded of. In one sentence: if your apology has an â€œifâ€ or a â€œbutâ€ in it, it’s probably not a good apology.

Tear it up and try again.

What prompted me to think about this wasn’t related to Sterling or basketball. It was an email I received after a hotel stay in LA. I had filled out a survey after my stay; I gave the hotel high marks, complimented a staff member who was extremely helpful, and included one very minor critique. The hotel manager emailed me to thank me for my feedback, specifically addressed both the positive and negative issues I’d brought up, apologized for the problem, and told me how he would address it if I stayed there again.

And you bet I’ll go back.

This isn’t the first time I’ve had this experience, but it’s all too rare. I’ve heard plenty of fauxpologies over the years â€“ defensive, accusatory, or even downright rude, as if I should be apologizing to them for my bad experience.

To me, that’s a pretty good indicator of how they feel about their customers.

I’m a pretty low maintenance guy in most situations. I’ll put up with a lot, I’m understanding and tolerant, I’m probably the last guy on earth who will ever utter the phrase â€œI’d like to speak to a manager.â€ I never make a scene, and if I say anything at all, it’s usually just to bring the problem to someone’s attention. I once had to convince a hotel manager to NOT give me my money back. So it’s not like I’m walking around with a chip on my shoulder.

But if I do have a bad experience, and I do bring it to your attention, I’m watching to see how you’ll respond. Be genuine and sincere, and I’ll probably be even more loyal to you. Be condescending, rude, or defensive, and you’ve probably lost a customer for life. And there are a lot of other people like me out there.

If you’re running a good business, you probably do things right at least 95% of the time, maybe even 98% or 99% of the time. But on those rare occasions when you do screw up, remember that fixing it starts with two words, spoken sincerely and unconditionally: I’m sorry.