The Hammersmith Flyover: A Lesson in Transparency 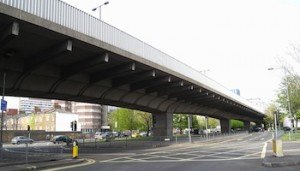 Thus began the most expensive cab ride of my life.

It was in London, just a few weeks ago, that I shelled out over $200 for a ride from Heathrow to downtown London. Not a long trip as the crow flies, but crows don’t have to deal with the Hammersmith Flyover. My cabbie did, and he wasn’t too pleased about it.

As soon as I climbed in the cab, he turned to me and said those reassuring words: â€œNow listen, I’m not going to f*** you over.â€

And then he went on to tell me why he was saying that. He pulled out a map, showed me the normal route from Heathrow to the city center, and explained that construction was forcing the weekend closure of a vital highway called the Hammersmith Flyover. He detailed a couple options for alternate routes, one more direct but congested, the other more meandering but with less traffic. He gave me his recommendation and told me how long it would take and what it would cost. His estimate of 105 pounds was 5 pounds more than I had on me, since I’d exchanged $210 back in Atlanta for 100 pounds (thinking that would be plenty for a day or two). When I told him I only had a hundred, he shrugged and said â€œwe’ll make it work.â€

And indeed we did.

We quickly found out that we had similar musical tastes, and spent the next hour and a half talking musicâ€¦ favorite bands, concert memories, that kind of thing. When he finally dropped me off at the hotel, I gave him every bit of money in my pocket and felt just fine about it.

Which is quite a statement considering I’d shelled out $200-plus for a ride in a car.

As I thought more about it, I realized that those first couple of minutes were critical. If he had started driving, gotten 10 miles down the road, then told me I was in for a 90-minute ride that would take all my money because of some made-up sounding thing called the Hammersmith Flyoverâ€¦ I would have felt totally scammed. Even though the service, price, and experience would have been identical, my emotional response would have been completely different.

That’s the benefit of transparency. It rarely changes the customer experience, but it can substantially change how the customer feels about the experience. For a cabbie, there’s minimal incentive to building that kind of goodwill, but for anyone who relies on repeat business, the value of trust is immeasurable.

I took that lesson to heart. In the weeks that have passed since that trip, I’ve challenged myself to look at every aspect of our business to make sure we are communicating as transparently as possible.

And while I may never kick off a client call with â€œNow listen, I’m not going to f*** you over,â€ I want every client to feel as good about the money they spent with me as I felt about that cab ride.