If you were asked to explain how Twitter works or what Twitter is all about, your answer would undoubtedly include the fact that tweets are limited to only 140 characters.

The need to be succinct is one of the many unique characteristics of Twitter, and also why you typically see truncated sentences, abbreviated words, and even (1/2) and (2/2) notations when you are left no choice but to continue your tweet thought beyond those initial 140 characters.

Tweet streams are jammed with text and links, everyone trying to fit in as much as they can before they hit ‘tweet’. Because of this, it’s extra challenging to make your tweets stand out amidst all the noise on Twitter. Along withÂ adding photos to your tweets to catch the attention of other Twitter users, here’s another idea to make your tweets more eye-catching: make the spacebar your friend. 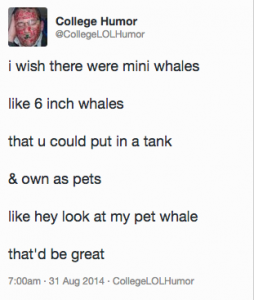 Adding an extra space to move text down to the next line does use up some of those all-important characters. However, doing so can have a much greater impact that makes it worth it sometimes.

Let’s look at how this tweet stands out among others in the Twitter stream before and after it. 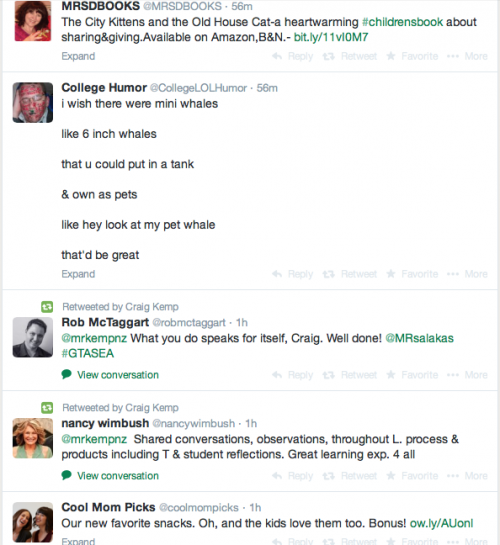 Depending upon the device you are using and its screen size, you’ll see some variation in the amount of space occupied by this single tweet. In this view (Twitter(dot)com on a MacBook Pro), that single tweet fills up a good 1/3 of the screen.

It’s undeniable that @CollegeLOLHumor’s tweet is the attention-getting tweet in this series, even if you don’t appreciate his pet whale joke.

This spacing trick isn’t something you can or should use with every tweet published. However, if impact is what you are going for – and you can sacrifice the characters – it can be a helpful, effective Twitter technique.