How to Respond to Outraged Comments on Social Media

There’s a rumor going around which may or may not be true: Kanye West is getting an honorary degree from the School of the Art Institute of Chicago.

People are very vocal about this rumor. To a large degree, those people are displeased. 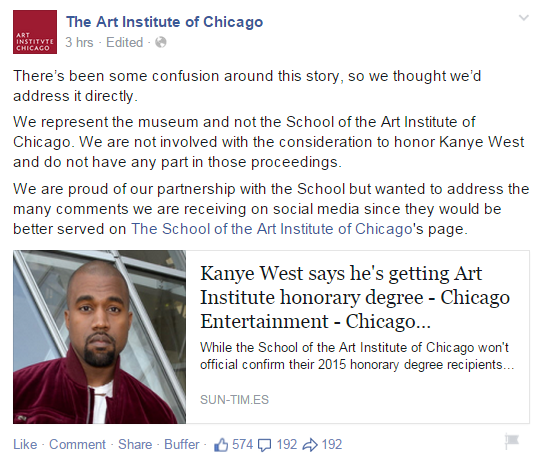 I’ll admit, in a world where I try to not get involved in drama that doesn’t directly affect me, I was surprised to find myself quietly watching the drama. What struck me most was how calmly the Art Institute’s staff responded to the angry comments and accusations. They addressed the issues, sometimes disagreeing with the original poster, but they did so in a professional, non-inflammatory way.

When dealing with negative comments on social media, it’s important to actively try to avoid a meltdown. But how do you keep your cool?

1. Take a Deep Breath That’s not a joke – I’m in no way just saying that. Take a deep breath, take a walk around the block, yell if you need to. Do what you need to do in order to get your blood pressure down. Responding in a calm, professional manner is key.
2. Remember, It’s Not Personal (Usually) When someone says that your chocolate chip cookie recipe tastes like it has mouse turds in it, it’s really more of a reflection of them than it is of you. While I realize that’s incrediblyÂ difficult to remember when some says something offensive, it is the truth. Taking a step back can help you remember that it’s your response that reflects on you more than the original comment.
3. Take it Offline We’ve said it before but it bears repeating. If someone is coming back to leave comment after defamatory comment – or their original comment requires follow up – try to move the conversation off of your social media platforms. Having things public allows the disgruntled commenter to gain attention, bring others in and more. Trying to contain things and provide excellent customer service offline can have some true benefits.

How do you keep calm when you receive negative comments on social media?