Facebook has always steadilyÂ rolledÂ out changes and improvements (even if some or most of us didn’t consider those changes to truly be improvements), but it does seem like the speed at which those changes are rolling out, is increasing. Some of it may be that as Facebook becomes more robust in its features, the differences between fan pages and profiles becomes more pronounced, and the count of features and functionality in its ad tools increases, that changes occur more often simply because there’s more to update.

More “stuff” there is, more to keep up with, right?

Part of it, too, is all the incremental changes that are put into place ahead of a major change like the upcoming overhaul of Facebook fan pages. You may wake up one morning and notice differences that weren’t there before you went to bed the day before, like message responsiveness, writing posts and saving as Drafts, and the ability to message anyone who has commented on one of your posts.

The Ads Manager interface justÂ got a makeover as well. It most recently presented you with all parts of the ad build process on 1 screen. You could scroll up and down as needed, working on whatever part of it you wanted to first.

Now you see one section of Ads Manager at a time, and have to click to advance to move to a new section. You begin with setting the Objective for the ad. 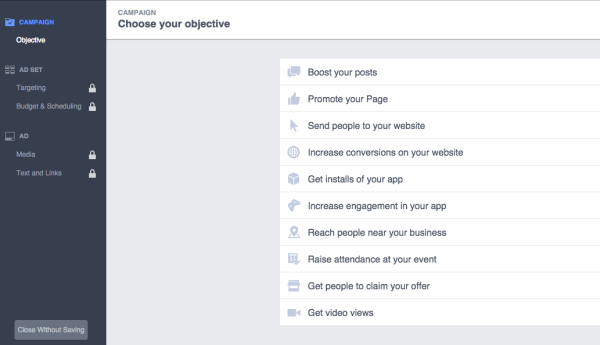 Next, is the Targeting and Budget.

You’ll notice in this section a new-ish feature that is super helpful – the ability to save the audience you created. This helps cut down on the time it takes to build future ads because you can choose to use a Saved Audience instead of manually re-building your audience demographics and interests each time.

Finally, is your Text and Links. 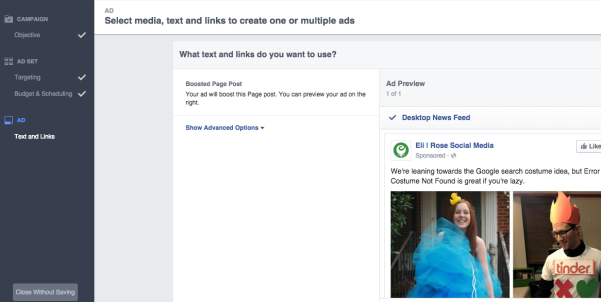 All sections of the Ads Manager have remained the same; the difference is how to access each step of the process.

A couple other new-ish features in the Ads Manager include:

CharacterÂ limitsÂ being lifted for Website Clicks Ads – Now you receive a warning that you are only guaranteed that the first 25 characters of your Headline and 90 characters of your Text will be shown, but you are allowed to enter characters beyond those limits. In my testing, far more characters do show in your ads; this seems to be a change to give those using Ads Manager more text space in their ads similar to whatÂ Power Editor users receive.

Carousel AdsÂ – Yep, Ads Manager users can create an ad with up to 5 images in it.

Edit an Existing Ad to Create a Display LinkÂ – Previously only Power Editor users were able to set the display URL located in the bottom corner of a Website Clicks ad. But now Ads Manager users can click to edit an existing ad and enter their own Display URL.

Instagram Ads have ArrivedÂ  – You use Facebook to create Instagram ads. Initially, you needed to use Power Editor to do so, but they are now rolling out to Ads Manager users as well.

The upside of all these changes is that Facebook continues to make it easier and more powerful to use its Ads Manager to the benefit of your Facebook fan page and your business (and without having to learn to use the more complicated Power Editor).