The Earth is Flat, and What to Do with Customers Who Insist

What if the Earth really is flat?

No, I’m not speaking metaphorically. And no, I’m not being a contrarian. Try to convince me the Earth isn’t flat. Go on. 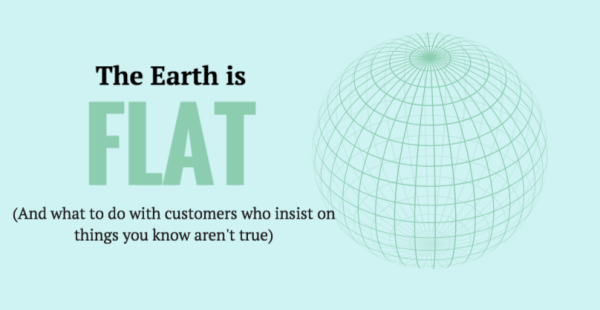 C’mon, photographic â€œevidenceâ€? So easy to fake! Heck, I carry a picture of Elvis in my wallet with the caption â€œA recent photo of Elvis Presley, who faked his death in 1977 and went into hidingâ€ (this is true, it’s a great conversation piece).

Come at me with science. I’ll poke at you until you admit you really can’t satisfactorily explain the complex math behind the experiments that â€œproveâ€ a round Earth. I’ll chuckle when you tell me to trust you that â€œvery smart peopleâ€ have done the math and proved that the Earth is round. Then I’ll show you some seductively simple experiments you can do yourself to prove the Earth is flat, like these.

Challenge me to explain common phenomena like seasons, or 24-hour days. No problem, I’ve even got an animated model. Take a look.

Ask me flat out to prove it. Prove the Earth is flat. No problem, here’s 200 proofs anyone can understand.

At some point, you’re going to become frustrated at my steadfast refusal to be won over. You’re going to ridicule me, call me names. I’ll shake my head sadly, acknowledging that you’ve been brainwashed to the point that you can’t see what’s right in front of your eyes. I’ll extend an olive branch â€“ when you have the courage to open your mind to new ideas, I’ll be here with open arms.

Now, take this interaction and move it online to a discussion forum, or a Facebook page, or a Twitter account. Who looks like the jackass? Me, the guy who keeps his cool and has a pat answer for every objection? Or you, the one who can’t defend your position and eventually resorts to name-calling?

The answer: me. It’s still me. I look like the jackass because THE EARTH IS A SPHERE.

But also you. You look like a jackass, too. Because you entered into an unwinnable argument and ended up embarrassing yourself.

So what? What does this have to do with your business? Simply put: your customers might be Flat Earthers.

Not literally, but close enough.

This isn’t about the shape of the Earth (which is spherical).Â It’s about people and our weird brains. It’s about the fact that we more readily accept information that supports our existing beliefs (something called confirmation bias).

Because of this, anyone can be a conspiracy theorist. Once someone has had an experience that creates a firm belief, his/her brain will subconsciously go searching for facts to support that belief. If the belief is outlandish enough, it’s a ticket to Conspiracyville.

I’ve heard plenty of conspiracy theories in my work as a market researcher.

Are any of these true? Actually, yes. But I won’t tell you which ones. And it doesn’t really matter anyway.

What does matter is what you do when YOU’RE the center of a conspiracy theory. Whether you’re accused of intentionally poor service or price fixing or corruption or political/religious conversion attempts or what-have-you, how do you win an argument with your very own Flat Earther?

Remember that the next time you’re faced with an irrational accusation, especially in a public forum. Your goal isn’t to win an argument with a Flat Earther. It’s to make sure anyone watching can tell which of you is the raving loon.