Skipper the Three-Legged Cat: When You Aren’t Aware of your Greatest Obstacle

I have a three-legged cat named Skipper. He and another cat joined our household last month and have more or less taken over the house. Skipper’s injury was fairly recent and he hadn’t had many chances to stretch his legs at the Humane Society. So in his first week or two, Skipper spent a lot of time hiding from everyone as he came to terms with his new surroundings and his missing leg. 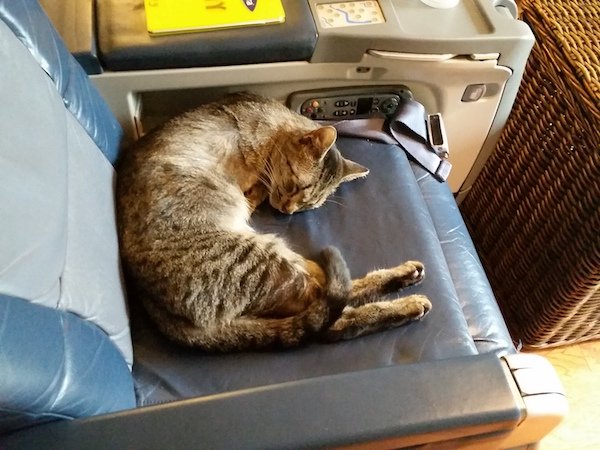 Now Skipper bounds around the house, playing with his four-legged feline companion Kirby and trying in vain to befriend our dogs while dodging our smitten children. The cats trample around upstairs chasing and wrestling each other, sounding like a herd of gazelle.

It’s safe to say Skipper’s come out of his shell.

But even at twice the size of our other cat Kirby, Skipper still loses plenty of play-fights. He is still a step behind when they dash from room to room. He still struggles with some of the high flying aerobatics his sister is mastering and doesn’t always stick his landings.

Luckily, Skipper’s got a long life ahead of him as an indoor cat, so he’s not out hunting down every meal and fighting off predators. Don’t anyone worry about Skipper.

But Skipper’s situation came to mind the other day when I got a phone call from Matt. Matt works at an ad agency that has been an occasional client of mine over the years. I’d been working on a research proposal for them and had just given a webinar to their agency outlining my recommendations. So when he called, I was hoping for good news.

â€œTom, we go way back, and that’s the only reason I’m calling you. I wanted to let you in on something.â€

Not quite the tone I was hoping forâ€¦

â€œYou were the last of three companies that we talked to. After you presented, we had a meeting to go over the different approaches and figure out who we want to hire. We all think your recommendations were good. But a few of the people in our meeting who saw your presentation were really put off by your Powerpoint. It looks awful, it’s really dated. Maybe that shouldn’t be a big deal, but it doesn’t send a great message. I know you’re good at what you do, but I had to reassure them of that. Normally I wouldn’t say anything, but I felt like you should know.â€

Ouch. That wasn’t pleasant to hear. It was embarrassing â€“ it felt like I’d spent an hour at a networking event with my fly unzipped and spinach between my teeth. It was frustrating â€“ why should it matter whether my sales deck looked pretty as long as I could do the work well? It was sobering â€“ how much business had I lost because of that?

But it was honest feedback. Right away I thanked him, enthusiastically, for passing that along. He wouldn’t have done it for just anyone, and it must have been awkward for him, but it meant a lot to me that he took the time to be honest with me.

As I was talking to him on the phone, I was watching Skipper lope down the hall with his strange gait, and I felt a sense of connection. Here I was giving pitch after pitch to prospect after prospect, hobbling along with an impediment that was obvious to everyone but me.

Fortunately for Skipper, he can be happy just being a cat. Plus, he’s got guaranteed room and board for life. I, on the other hand, need to earn my keep. So it was pretty disturbing to realize that I was blind to such a prominent obstacle simply because no one had ever pointed it out to me.

That made me realize something. We’re probably all battling something that’s keeping us from being more successful, without ever knowing what that thing is. We think we’re plugging right along being the best whatever (cat, researcher, marine biologist, basketball player, you name it) we can be. And maybe the path to being even better is just hidden in our own blind spots.

So do yourself a favor. Ask people for feedback. Find ways they can share comfortably with you (maybe it’s an online survey, or a comment box, or some other way that grants anonymity). Make sure they know how important their feedback is and how much you appreciate it. And when you get feedback, the best way to show you appreciate it is by acting on it.

So with that, I’m off to work on a PowerPoint template. And Skipper? He’ll just take a nap, thanks.