Take That For Data

On Monday, April 17, 2017, Memphis Grizzlies coach David Fizdale unleashed a press conference rant that became an instant classic. Coming off a playoff game loss to the San Antonio Spurs, Fizdale criticized the referees (an act that resulted in a $30,000 fine) for what he felt was preferential treatment toward the Spurs. After citing a significant disparity in foul calls and free throws, Fizdale ended with â€œTake that for data!â€ 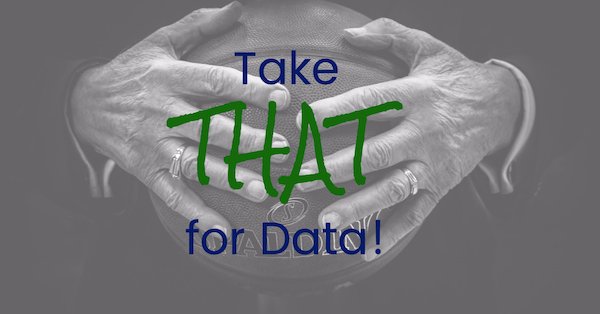 A meme was born, a Twitter account was created, and within hours t-shirts were up for sale.

Of course, anyone who has watched basketball, and particularly the NBA, over the last few years is aware of how data-oriented the league has become. There are numbers upon numbers upon numbers, and probably thousands of ways of analyzing player and team performance. So it didn’t take long for NBA fans to add their own interpretations of the game and Fizdale’s critique, bringing their own data either in support of his argument or against it.

Whether you think the Grizz were the victims of poor officiating or not (ahem, they were), there’s an interesting discussion behind the controversy. How far can analytics go? What can really be measured? Some feel that analytics can help spot trends but not necessarily explain them. It’s one thing to measure points or assists or rebounds, but what about intangibles like team chemistry? Analytics can’t tell you how well a team is meshing, how they feel about each other, whether they are true teammates or just a bunch of guys playing a game together.

There’s an opposing school of thought â€“ one I happen to agree with â€“ that says everything can be measured, or at least approximated. Even teamwork, once you know how it’s expressed. That’s why a Berkeley scientist counted up things like high-fives and fist bumps to determine the level of team spirit exhibited by each squad, and was able to statistically link that to game outcomes.

Now, I’m the first to scream â€œcorrelation is not causation!â€ every time a study claims to find a link between chocolate and cancer, or video games and violence, or what have you. There are plenty of reasons to think wins cause high-fives rather than high-fives causing wins. But it’s easy to watch some teams play and think â€œwow, these guys really enjoy being out there together, that has to be an asset to themâ€ â€“ and as it turns out, that gut feeling is something you can measure.

The same is true outside of the NBA. If you’re running a small business, or a marketing department at a large business, you have plenty of data at your disposal. Typically it’s easy to see the â€œstat sheetâ€ of what is happening â€“ your sales, the time customers spent on your website, click-throughs on email campaigns, that kind of thing. The trickier stuff is ultimately also the more worthwhile data to chase, the information that tells you why things are happening.

To get there, you have to decide how you want to impact your prospect, what behavioral changes will happen as the result of that impact, and how you can observe the prospect in a way that allows you to measure that change. That can be as simple as watching for specific customer cues in a store setting (lingering over a display case an extra minute, for example) or as complex as a multi-phase consumer research study.

Take that for data.