Google Plus: The Basics

Google Plus is not to be confused with the Google +1 button, which is comparable to other popular social media votes, including the Facebook “Like” and Twitter retweet.

Google Plus, as an invitation-only platform, added a record-settingÂ 20 million users in just a few weeks’ time. Google Plus connections are made when 1 user places another into a “circle”. You can have several circles, and can place the same person in more than 1 circle if you choose.

The purpose of the circles – and how Google Plus is setting itself apart from Facebook and Twitter – is that only the people in a specific circle can see the updates you post in that circle.

So if you have a message you want to post that is only applicable to your Family or Co-workers or College Friends, only that specific group of people will see that specific update.

An important note about the circles: A person you add to a circle does not see the circle they’ve been added to.Â

This is an important mention because some heavy social media users are hoping that Google+ can help them to broaden their reach, even though Google Plus is designed to do the opposite. If you add someone to a circle and they – as a courtesy – add you to one of their circles, too, you have no way of knowing *what* circle they put you in. Google Plus makes it very easy to courteously “follow back” another user by placing them in a circle you never intend to visit nor post in.

This, clearly, is not the intention of this social platform. But heavy social media users need to be aware that measuring your true social reach is very difficult with Google Plus as compared to Facebook fan pages or Twitter followers.

Much like your Facebook “wall”, Google Plus has a “stream”.Â This stream contains updates of those you are connected with and allows you to post an update – including a photo, video or link – as well. You also have the ability to comment on, share or +1 others’ posts. 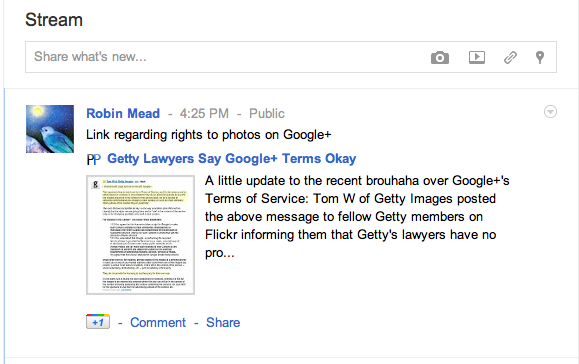 You can choose to tailor your stream by selecting one or more of your circles in the left sidebar.

When posting a new update for yourself, you are given the option to select which circles see that update.

If you had a Google Profile prior to the launch of Google Plus, it is now integrated under the “Profile” button.

Google Plus also has a video chat feature called “Hangout”. You are prompted to download a plugin when initiating the Hangout feature for the first time. An advantage to a Hangout over Skype is the number of people who can take part in a Hangout for free. The downside, however, is that anyone in your circles can jump into your Hangout at any time.

What do you think of Google Plus? Do you think it will replace a different social media platform you are currently using?