Ideas for Using Tumblr for your Business 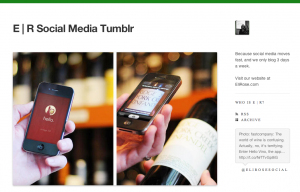 “Tumblr for business?!“, you ask incredulously.

The 6th most popular social media platform can and perhaps should be part of your online marketing plan.

(And we thought Tumblr it had a long list of merits long before we created the Eli | Rose Tumblr blog, BTW.)

What’s So Great About Tumblr?

I know a lot of people may not be very familiar with Tumblr, not even from a personal standpoint. Tumblr is a blogging platform, but a lot simpler and less sophisticated than, say, a WordPress blog.

Though what some might view asÂ less are the same things that make Tumblr more.

For example, comments are not standard on Tumblr. And while you can add them to your Tumblr blog, most people don’t.

You are up and blogging – complete with your chosen template and vanity URL – in a matter of minutes.

A photo with a caption or a short paragraph is often the extent of a blog post on Tumblr. You don’t typically see a lot of static pages on a Tumblr blog, either.

Why Should a Business Consider Tumblr?

For us, Tumblr is the perfect place to share news or info on a social media feature roll out that’s important enough to mention, but not involved enough that it really substantiates a regular blog post (on our WordPress website). It’s much easier to share and to refer back to when it’s part of a blog vs a social media update as well.

Have you given Tumblr a thought? Do you use it personally?