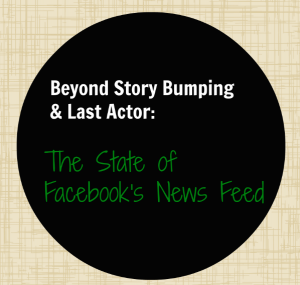 Listening to a recent Google+ Hangout with Mari Smith and Mike Stelzner was both refreshing and frustrating. They were talking about the recent changes to the EdgeRank algorithm that controls Facebook’s News Feed. It’s been a few weeks since Facebook introduced story bumping and last actor as the two major changes to its algorithm, and by now, many fan page admins are feeling the effects.

And among those we’ve talked to, those effects are not positive ones.

A Bit about Story Bumping and Last Actor

Story Bumping is designed to show you an update that has received a lot of activity, that you otherwise may have missed due to the time that has passed since you last visited Facebook. Last Actor is Facebook’s tracking of your last 50 interactions. The thought there is those you interacted with most recently are the people and pages you’d probably like to see more updates from.

You Mentioned the Hangout was “Refreshing and Frustrating”?

Yes. Yes, I did. The refreshing part came from the fact that this was the first article or video I’ve watched or listened to that didn’t say “content is king” or “focus on creating really great content” as the magic pill to ensuring your fans will keep seeing your content given the latest algorithm changes. There are a lot of social media managers who have always worked hard at – and succeeded in – producing and curating high-quality, relevant content that targets their business’ core demographic. And these same fan page admins who have been doing all the “right” things and seeing results, saw big drops in Reach, engagement, and for many, the slowing of fan growth, too. All as a direct result of the News Feed changes.

The latest Facebook developments are frustrating for obvious reasons. Facebook already has a lengthy list of hurdles to be crossed into order for a business to be successful on its platform. A lot of businesses have invested a ton of time and money into their fan pages, some even using their fan pages in lieu of having their own websites. (But the dangers of entrusting your entire online presence to a free tool you can’t control is a different post topic entirely.)

Key Takeaways from the Hangout

The Hangout was an hour long and you can listen to it via the link in the introduction. The list below outlines my main takeaways from listening to the video.

As if that wasn’t enough to take in, there’s more.

Besides “paying to play”, is there anything else to do?

No one knows what the next Facebook change will be. We can all hope against hope that some of these recent changes will be reversed in some way. In the mean time, it’s important to pay attention to what’s happening on your fan page, consider paying to promote the occasional post or run an occasional contest, and spend some time evaluating the future attention and effort you give your Facebook fan page as opposed to your other social media networks.