I’ve had plenty of colorful cab rides, including a foul-mouthed London cabbie who gave me the most expensive ride of my life and reminded me of the value of transparency, and a Knoxville driver who gave me a great first impression of the city and inspired a post on being a brand ambassador. I’ve also feared for my life as a cabbie with a bad case of road rage had a screaming match and several near-collisions with another driver; I’ve been the target of more than one religious conversion attempt; and one time I remember legitimately thinking â€œI wonder how long it will take them to find my body.â€

I can’t say my most recent ride topped all of that, but it certainly earned a spot on the list. 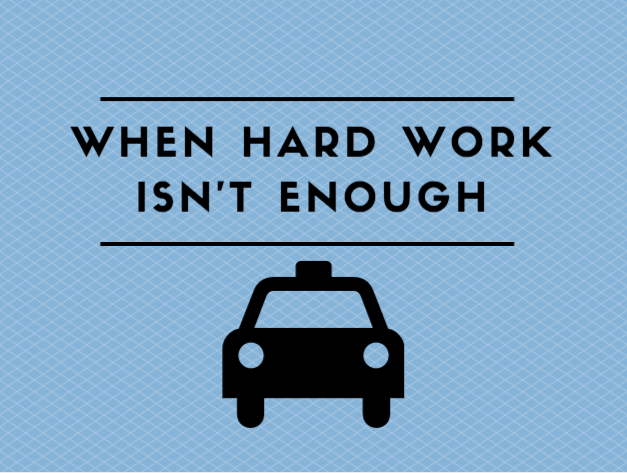 I don’t know his name, but I’ll call him Jordan since that’s where he’s from. As we careened down the interstate, his arms gesturing wildly and his voice at a constant near-scream, one thing became immediately clear: the man was a heck of a hard worker.

He was driving a cab 30-40 hours a week on top of a full-time day job because he was putting his son through college. He saw this as a light load, since a year ago he had TWO kids in college at the same time, and was working over 100 hours a week across two or three jobs to make ends meet. Before he moved to Dallas, he owned a restaurant and would routinely sleep in the back office for 4 hours a night after spending the other 20 on his feet cooking, taking orders, bussing tables, and tending to the books. It was exhausting just listening to him describe his average day.

So how did Jordan end up in Dallas anyway?

Jordan, you see, has a penchant for speaking his mind. It got him in enough trouble at home that, after being jailed for criticizing King Hussein and doubling down on his insults when given the chance to publicly apologize, he was deported. He packed his bags, bounced around a few countries, ended up in more trouble here and there, and finally made his way over to the good old US of A.

He first settled in Oklahoma, where he started his restaurant and enjoyed modest success, before a construction project in front of his diner kept patrons away and threatened to shut down his business. So he complained to the appropriate agency, and they ignored him, and he filed a lawsuit, and he lost. So then he arranged a meeting with a representative from that agency, things got heated, and he may or may not have threatened to bludgeon said representative with a paperweight if the construction didn’t stop. After he was escorted out, it was suggested to him that he’d have trouble maintaining the appropriate licenses for his business and he should probably move on.

And THAT’s how he ended up in Dallas.

We are all brought up to believe that if you work hard, you’ll succeed. It’s the fundamental assumption behind the American dream. But Jordan’s story exposes an important caveat that we all need to pay attention to: your character can undermine your work.

In Jordan’s case, a hot head and an inability to hold his tongue undid years of labor. But this isn’t about Jordan. It’s about all of us.

This is true if you’re dealing with customers on social media. Being ultra-responsive is great, but a snarky or accusatory tone can negate that.

It’s true if you’re a gourmet chef. Your patrons may appreciate your incredible creations, but refusing to switch out sides because the requested replacement is â€œtoo starchy for the entrÃ©eâ€ can leave a bad taste in a customer’s mouth. (Yes, I’ve had this happen).

It’s true whoever you are. Despite what inspirational posters and pithy tweets tell you, there’s more to success than showing up and working hard. Your personality matters, too. If you’re running a small business and trying to wear many different hats, you need to be honest with yourself about which ones fit and which ones don’t. And for the ones that don’t, find another head to fill them.

With that advice dispensed, I think it’s appropriate to close with Jordan’s parting words to me, in case you were wondering if he’d learned from his past experiences. For full effect, imagine them delivered at 120 decibels with a heavy Middle Eastern accent:

WHY DIDN’T YOU TELL ME YOU WERE FLYING AMERICAN EAGLE INSTEAD OF AMERICAN? NOW I HAVE TO DRIVE TO DIFFERENT TERMINAL TO DROP YOU OFF. DALLAS IS BIG AIRPORT, YOU HAVE TO KNOW WHERE YOU ARE GOING. NEXT TIME YOU SHOULD KNOW BETTER. HERE IT IS. YOU CAN GET OUT.