Finding Meaning for your Employees

Last month, our family took advantage of a teacher in-service day and piled in the minivan for a trip to Huntsville, Alabama, home of the US Space and Rocket Center. We had a great day wandering around the grounds, walking among rockets and missiles, learning about the International Space Station, and seeing bits and pieces of our nation’s history.

The crown jewel of the center is a Saturn V rocket suspended overhead inside a massive exhibition hall. Walking the length of the rocket, seeing it separated into its different stages, and grasping the magnitude and complexity of this feat of engineering, is absolutely awesomely breathtaking. And since we went on a random Friday in February that wasn’t a day off for anyone else, we had the place more or less to ourselves. 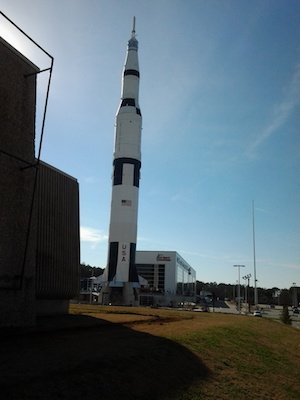 In fact, the only group that outnumbered us was the docents. Every time we stopped to look up, or around, or to read a sign or plaque, someone was there to share a story. In many museums, docents end up reciting the same stories you could find on the internet. Here, they were telling their own stories.

In one sense, they were small stories. Each person played a tiny role in a massive program, and they were all aware of that. But their stories were told with the pride of someone who has been part of something big, something tremendously important. One man was the project manager in charge of coordinating the engineers and suppliers who created the engines that powered the Saturn V and its payload into space. Another was tasked with determining (in the absence of any real data) what the surface of the moon would be like, so the lunar rover’s wheels could be designed for optimal traction. Another was called in after an unmanned test launch failed in mid-air and had to figure out what went wrong and how to fix itâ€¦ without a single bit of useful material wreckage to work with. And so on.

Each of these former NASA employees was a contributor to an amazing success story in the Apollo space program. Their individual contributions were small, but the impact was immense. They were happy to share their stories but shrugged off any praise I gave them. Instead, they pointed to the program, to the NASA team as a whole. That’s what I heard over and over, from docent after docent.

Of course, some might say it’s easy to rally the troops around a goal as dramatic as putting a man on the moon. But I see this same pattern over and over in the work we do, whether it’s someone packing a monogrammed backpack to ship to a customer, or pushing buttons on an assembly line all day, or flying passengers across the country. Some people think their work is meaningless, some think their work is meaningful. The difference? Often it comes down to the employer.

This is true whether you have one employee or ten thousand: if you’re the boss, it’s up to you to make work meaningful for your employees. That comes down to understanding the true impact your company has on its customers, employees, and broader community, and then communicating that to your people.

Next week I’m hosting 7 webinars for a client, targeted to blue-collar employees at different manufacturing plants across the country. I’ll be reviewing the results of a recent stakeholder satisfaction study we conducted with customers, employees, and community leaders, and sharing some of the personal stories I heard as I visited these facilities and interviewed their employees. Now, this isn’t something my client has to do (and many of my clients don’t). They could take my findings, make a few minor changes, watch retention go up a few points, and send me on my way. But this client gets it. They understand that you can’t just expect someone to punch in for a 10 hour day in a hot factory and give a crap. And they understand that their success ultimately depends on motivating thousands of people to genuinely care about their jobs and the people around them. So they asked me to pull together some stories and statistics that show how the company has impacted the lives of its customers, its employees, and the communities it calls home. I’ll be sharing those stories so that their employees understand the true significance of their daily work.

After all, if you want your employees to feel like a team, you have to give them something to cheer for. Are you doing that?