How to Invite a Guest to Facebook Live from your iPhone

Facebook continues to update and roll out the ability to share your screen with 1 other guest when live on Facebook. Initially, this “interview-style” Live format was available to iOS users only and required you to hold your iPhone vertically. What viewers saw was more of a picture-in-picture format or something you’d see when you use FaceTime. More recently, the mobile experience of inviting a guest to your Facebook Live broadcast has changed, allowing you to hold your phone horizontally, in landscape mode, with some additional special features we’ll highlight below.

TIP: If you want to test out Facebook Live at any time, create a Friends List with just 1 other person. I did this with Ronda of BellaV Marketing and then went Live to that list of only her instead of an audience of all my Friends or Public. This approach helps if you are worried about tech hiccups or coming across as less than the pro you are during your test runs. 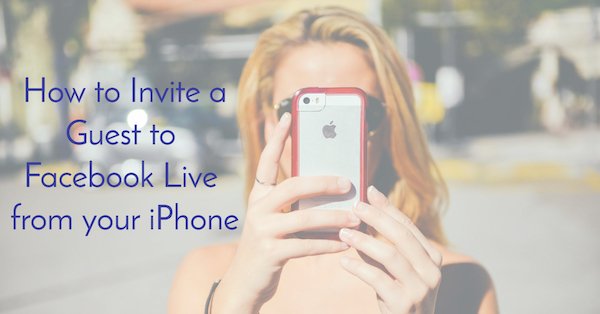 How to Invite a Guest to your Facebook Live Broadcast

When you begin your Live broadcast – no matter if you are going Live on your iPhone, on desktop, or on your Profile, Page or Group – you’ll need to add some text to the Live post before clicking to go Live. This screen is the same if you are holding your phone vertically; just a different orientation of icons. 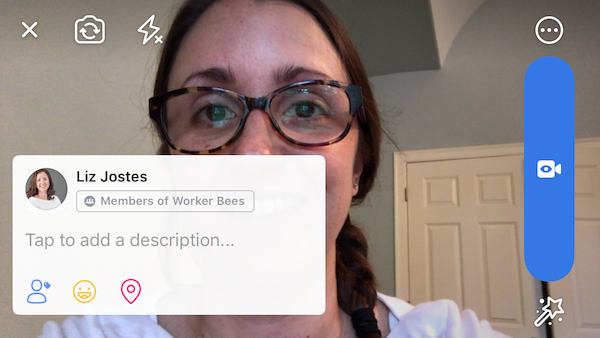 You have a choice to allow viewers of your Facebook Live to request to join you as a guest. In the same screen, you can choose to invite Friends or Group members to watch. 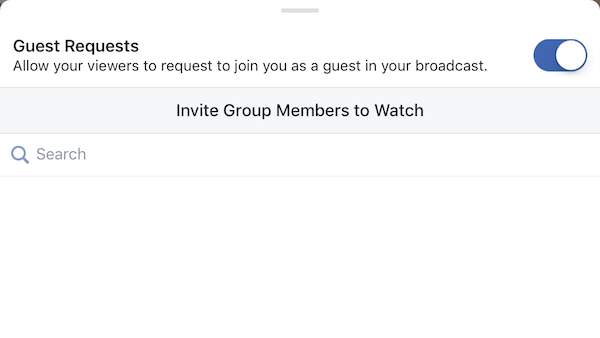 If a Facebook Live broadcast you are watching allows guests to ask to be invited to the Live broadcast, viewers will see a notification like this. 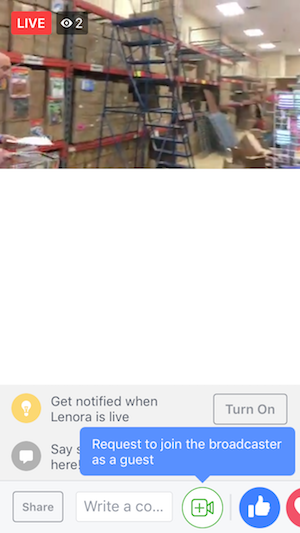 Once you are live and have at least 1 viewer, you’ll start to be shown notifications from Facebook naming Group members (if going Live in a Facebook Group) or Facebook Friends of yours who are watching your Live feed (Since the screen shots used in this post were from a test with only Ronda as my audience, she was the only person available for me to invite.).

There is a bit of a lag on notifications that appear on your screen and to be able to invite another Facebook user who is watching, to join your broadcast. Once Facebook catches up with your live viewers, you’ll see a row of boxes at the bottom of your screen. Eventually, your viewers will begin to populate those boxes. If you can invite them to join your Live broadcast, they will have a green circle with a video icon showing in the top right corner, as seen below. 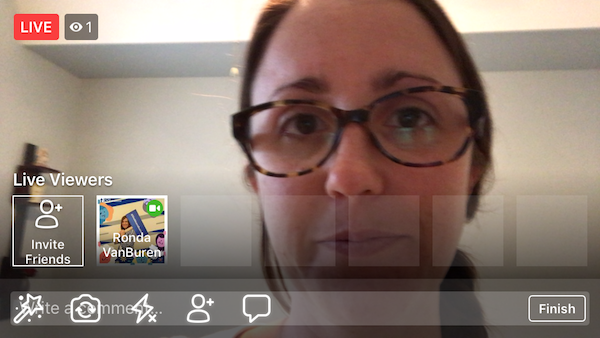 Tap on a viewer with a green circle to invite them to join you as a guest on your Facebook Live broadcast. 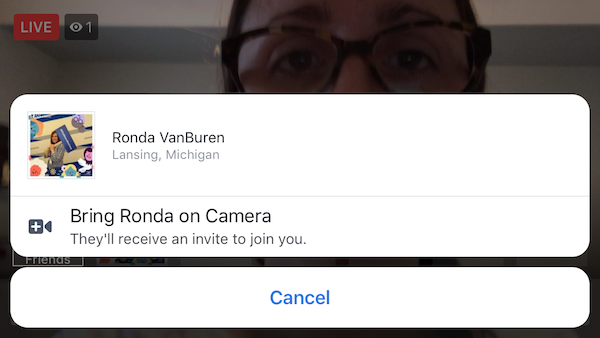 Once you click to invite, you’ll get a notification near the top of your screen saying, “Inviting”, with your guest’s profile photo on the left and an X (should you need to cancel that invitation) on the right.

The guest you invited to join you on your Facebook Live broadcast sees the notification below. Note: If you, as a guest, are holding your phone differently than the host, there will be a notation near the bottom that indicates you need to rotate your phone in order to join the broadcast. 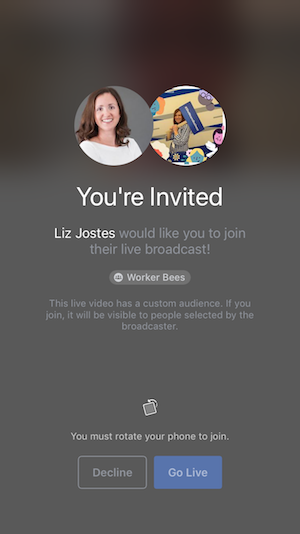 As mentioned above, Facebook Live with a guest has a very “FaceTime” look to it when your phone is held vertically. Ronda and I previously tried this orientation, which you can see below. 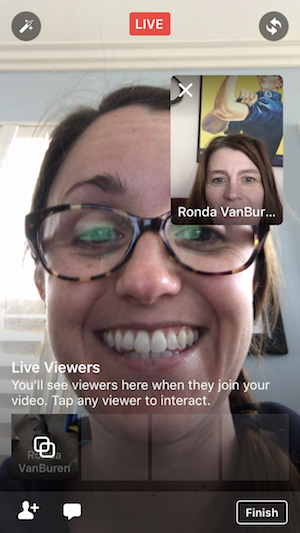 Now with the horizontal option, it’s truly a split screen type of view. 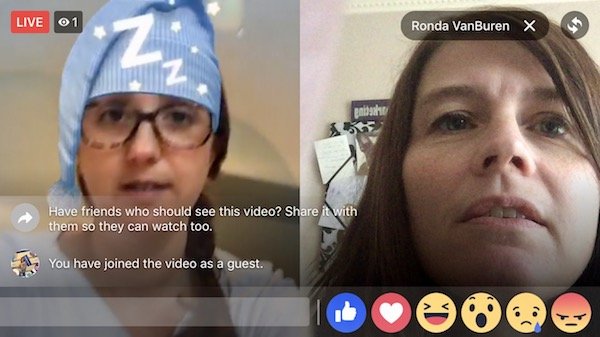 Note: Special features like wearing hats or giving yourself a Snapchat-style filter are all available as the host. You can also write on your side (host side) of the screen. 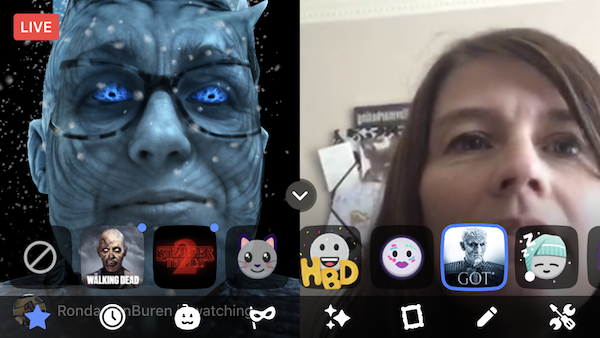 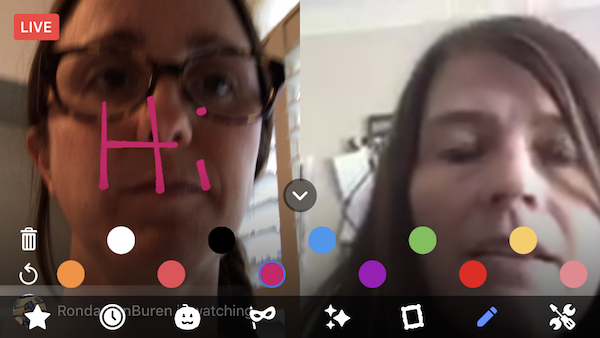 If you plan to invite more than 1 person to your broadcast, you’ll have to uninvite your current guest from your live feed. I tapped the X that is above and to the left of Ronda’s head to remove her as my guest, freeing up the opportunity for someone else to join (if there were others on this test run.

Needless to say, the cross-promotional opportunities are nearly endless with this interview-style shared screen feature of Facebook Live.

How has your experience been? Have you hosted or been a guest on a Facebook Live yet?