Facebook Live: How to Live Stream Video from your Page or Profile

Facebook Live is the new live video feature available to Facebook Pages, Profiles and Groups. In only a few steps, you can “go live” from your smart phone or desktop, meaning, begin to broadcast a live video to those who follow your Page or Profile, or are in your Facebook Group. You can also broadcast live on Facebook from your desktop following these instructions from Ian of iag.me, or if you’ve been granted that capability from your Page by Facebook. If you have the ability to go Live on Facebook, you’ll see a “Start a Live Video”  tab in your New Update section. It may look like either of the below pictures. 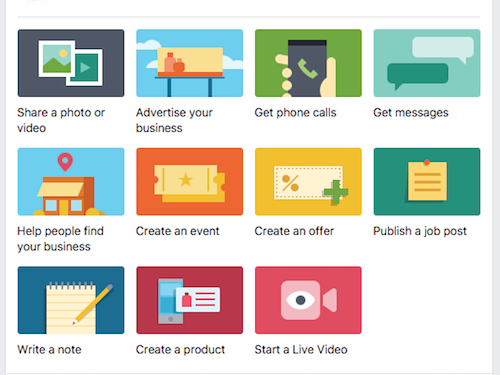 Here it’s the dark pink button in the bottom row, on the right.

TIP: Want to go Live on your iPhone in landscape mode? Here’s the hack for that.

It can be intimidating to make your first Facebook Live broadcast, so through this post, I’m going to show you what to expect leading up to your debut and some cool features you can take advantage of after the conclusion of your first live broadcast. 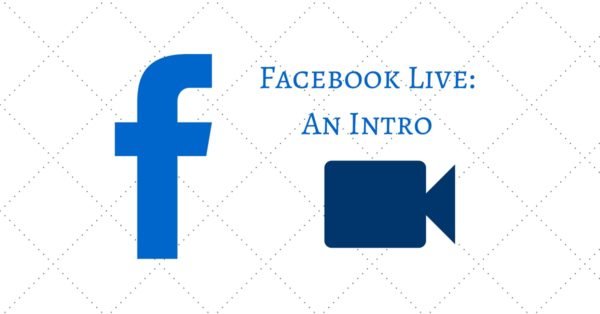 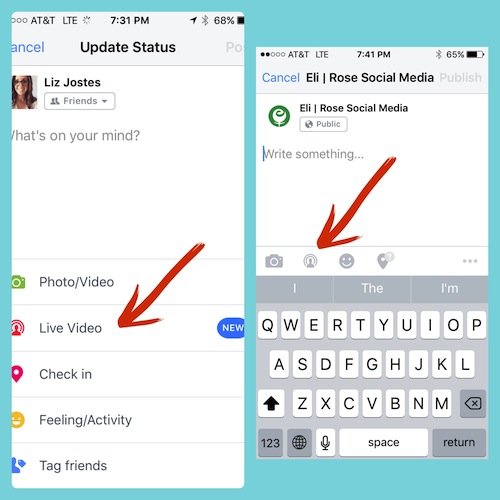 Facebook has a few introductory screens before you are live on Facebook. First, you are shown a basic intro slide about the intended use of Facebook Live. 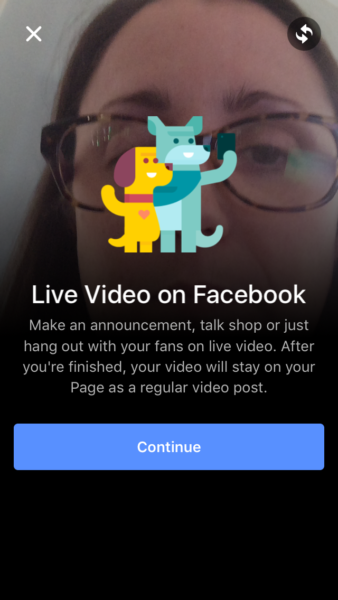 Then, click on the blue Continue button. The second screen is what you see below. You are asked to provide a description of your soon-to-be Live video. This text will be shown in the News Feed during your broadcast and on your Page, Profile or Group once your live broadcast is complete. You can reverse the camera by clicking on the double arrow icon on the upper right corner.

If you are broadcasting live from your Profile, you can control the audience that sees your video (Page posts are Public). In fact, you could even do a test run and change the setting to “Only Me” so no one else would see it. This is my favorite tip for people who are nervous about going Live…do a few test runs on your Facebook Profile to an audience of only you until you get more comfortable!

Once you are all ready to go, click the blue Go Live button. 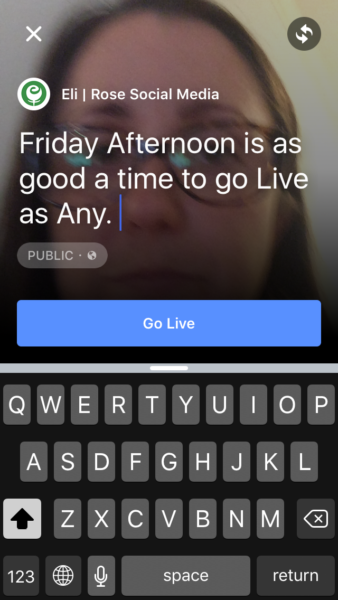 You’ll see a 3 second countdown, and then you are ON!

While you are broadcasting, you’ll see a timer counting up the seconds of your broadcast & the count of viewers you have at any given time. You’ll also be able to see comments as they come in and respond live to them, if you desire (the ability to see comments varies if you are on desktop, mobile or using a 3rd party tool).

Make sure you have a strong signal! I ran into that during my broadcast. It was strong before I started, when I began and at the end, but it did get fuzzy in the middle of my live broadcast. Test your internet speed before going live here: http://beta.speedtest.net/

Make sure you put your phone in Do Not Disturb mode, too! It would be pretty bad if you received a call during your live stream.

Start smiling before you hit the Go Live button! That way you don’t get have a strange look on your face when the video broadcast begins and you have a few seconds at the beginning of your video to use as a good thumbnail.

When you are done with your live stream, you’ll hit the red button to stop recording and be given the option to save the video to your camera roll. 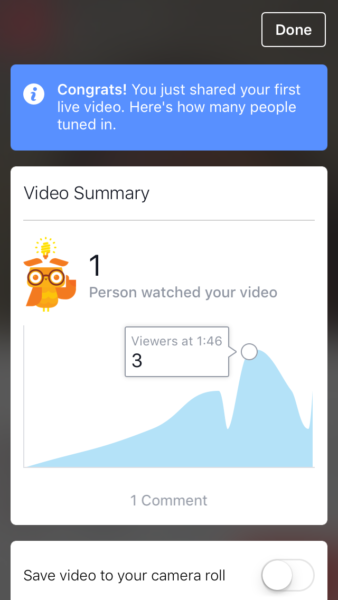 All Facebook Live videos are saved and added to the video section of your Page or Profile. You’ll have the same editing capabilities and similar analytics with Live videos as you do videos uploaded to your Facebook Page. For example, you can edit a video’s title and thumbnail, have Facebook generate captions, and upload an SRT file for captions. From the Edit view, you’ll also have the opportunity to add additional info about your video like giving it a title and adding video tags. 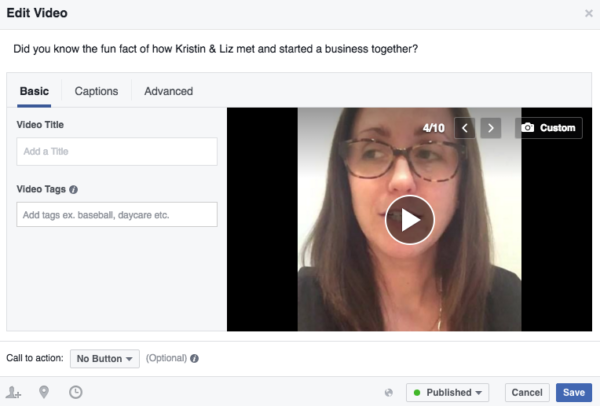 You have regular Post Insights like you would for any other video that was published on your Page. You also have typical video metrics like Unique Views and 10-Second Views. 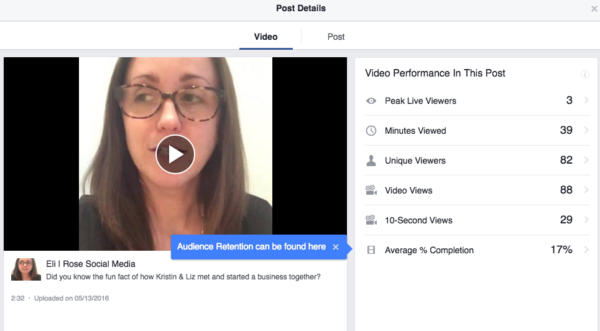 When I went Live for the first time, I did it without warning, and on a Friday afternoon. I only spoke for 2.5 minutes, and wanted to try it just to understand what the process entailed. So, if you were streaming a Facebook Live video with the intention of being strategic with it, you should plan to notify your followers and fans ahead of time that you have a live stream scheduled and what it’s about. You can follow these steps provided by Facebook to notify your Fans of an upcoming broadcast. Some 3rd party tools allow for pre-scheduling as well. Also, plan to speak far longer than just 2.5 minutes. You’ll find that the longer you speak, the more people join in to watch. If you are planning to talk for a long time, make sure you reintroduce yourself and the topic through your live broadcast since several people will be joining along the way and would have missed your opening greeting.

Even after the video is complete, it will remain in the News Feed for a while. While there was only 1 person who watched while I was live, there was a total of 88 video views. The Reach was 322. If you are pleased with your Facebook Live video once it’s over, you can pay to advertise it, too.

Now taking your live video strategy one step further, you can download your videos and then upload them to YouTube for increased exposure!

The second time I went live on my Facebook Page, I had a plan to share some valuable video tech tips I had learned. That broadcast was almost 4 minutes long, was viewed by more than 1,000 people, had a Reach of just over 3,000, and was shared 2 times. 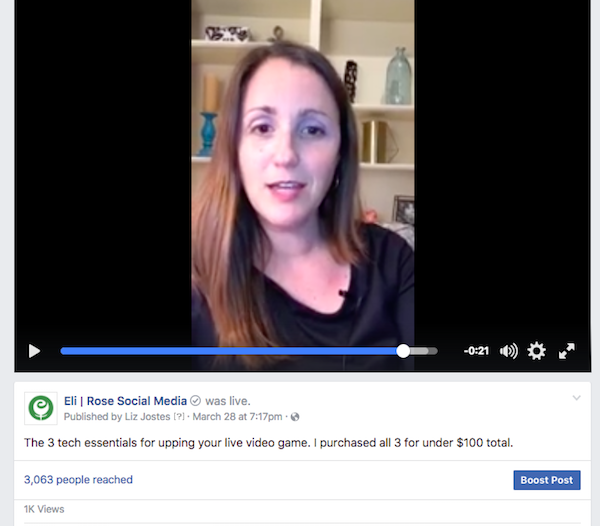 To effectively use Facebook Live to grow your Facebook Page, develop a video content plan ahead of time. You could do a series of tips posts, for example. You could plan a series of ‘behind the scenes’ videos to showcase your business, products or services. You could even let employees ‘go live’ on your Page.

Don’t forget to create some Facebook custom audiences of people who viewed your videos, too!

Do you use props in your Facebook Live broadcasts? Or have you ever watched a Facebook Live where the broadcaster held up a piece of paper or had a white board behind them, and the text on the paper or white board was backwards? Facebook created a ‘fix’ for backwards text plus added some other fun, colorful features to its Live streaming (when done on mobile only). We cover exactly what those new video features are, how to get to them, and how to fix the backwards text problem in this post.

In early April 2017, Facebook began quietly rolling out the ability to share your Facebook Live video screen with another Facebook user, seemingly to combat some of the 3rd party tools that had been growing in popularity that made this split screen option possible. Loosely described as an interview format, this new split screen feature was initially made available only on Facebook Profiles, not Pages, and allowed the Facebook user who initiated the Live stream to invite 1 person at a time to join him or her. As your Facebook Live guest left your Live broadcast, you could then invite another viewer to join you.

Facebook Live Split Screen initially rolled out to iOS mobile users and only to Profiles, but has been rolling out more broadly in time.

Once you’ve connected your Facebook Group to your Facebook Page, you can decide if you’ll go Live as yourself or as your Page. The way to switch between these 2 Facebook “personalities” when on mobile is a bit hidden. Click on the down arrow located next to your Page name. A new screen will open, and then you can select if you’ll publish your Live video as you or your Page. 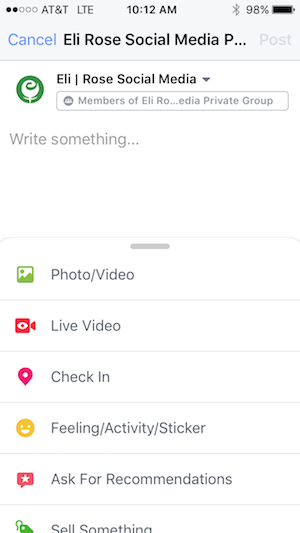