Pinterest is a Social Media Network that’s No Longer Social

Pinterest has always been different than the other social media platforms with its boards and “saving inspiration and ideas”. Pinterest is all about great images, organizing all that inspiration goodness however you’d like, plus required website links.

So, all in all, this sounds pretty good, right? Pinterest doesn’t have the woes of the other social media platforms and businesses love it for website traffic.

So, where’s the issue?

Pinterest has changed its approach from social and veered almost 100% to becoming (only) a visual search engine. 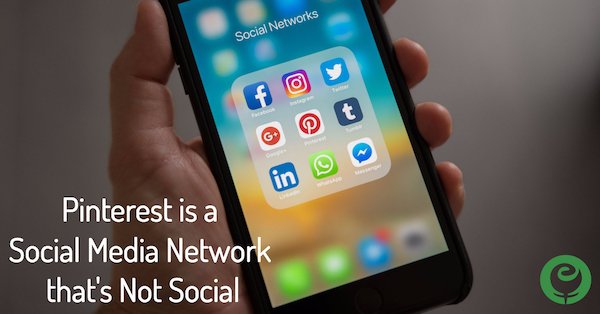 Pinterest is Not a Social Network, but it is a Search Engine

Back in the olden days of Pinterest, you followed other users’ boards, and saw pins from those users’ boards in your feed. You could click on the heart to ‘like’ a pin, easily leave a comment, and see – without effort – who each pin belonged to.

Then as Pinterest evolved – introduction of an algorithm and all – the social media elements dropped off one by one. First, your Pinterest feed switched being full of pins from people and boards you follow, to a Pin Feed half (or more) full of pins “recommended for you”, coming from pinners you have no connection to at all. Next, Pinterest eliminated the ability to like a pin. Yep, they took the heart icons away! After that, they began hiding the names of the pinners on the pins you see in your feed. Most recently, they introduced hashtags to the platform, yet another nod to search.

To be clear, there has always been an important element of search for Pinterest. For years, well-optimized Pinterest boards have surfaced in Google search results. A Pinterest Board Title and Board Description basically act as an SEO Title Tag and Meta Description. So, search has definitely always been an important theme with Pinterest. And, obviously, you can search on Pinterest itself. In fact, 2 billion searches occur on the platform every month and 97% of Pinterest searches are non-branded.

What does all this mean for you?

If Pinterest is part of your social media strategy, it’s time to brush up on your SEO skills. Without great board titles and descriptions, and strong pin descriptions and hashtags, your beautiful images aren’t going to get the reach, clicks, repins or overall payoff on Pinterest that they otherwise deserve.