Starting a new social media profile can be challenging. You have 0 followers and no update history to your name. You not only need to find relevant accounts to follow, begin posting regularly, and decide how you’ll organize your followers, but you really need to get people to follow you back.

So, let’s say you get your social media account rolling and you start getting people to follow you back. That means you’re golden, right?

Having that mutual connection is absolutely a big hurdle to cross, but the fact of the matter is, if you don’t make the cut for a key Twitter list or Google+ Circle, you really aren’t much further ahead than you were before you got that follow or connection.

Because moderate to heavy users – who are also the ones who have several hundred to several thousand users they follow – have so many updates in their streams that they have no way to sort out the updates they want to see most unless they set up some sort of filtering system. 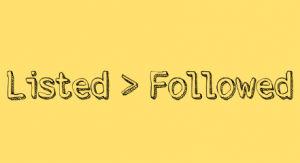 There are several approaches to growing your social media following and choosing who to follow and follow back. There are also several ways for a user to organize those they follow into smaller groups. It could be by location, industry, customer type, mutual shared interests, etc.

How Do You Become Awesome Enough to Make a List?

There’s no guarantee or magic formula to ensure you are listed by each and every user who follows you back. Following social media best practices will definitely give you the best chance, though.

No matter how wonderful and engaging you are on social media, you can never be all things to all of your followers. But it helps to understand that simply getting the ‘follow’ isn’t any kind of guarantee that those users are paying attention to your updates. Further, if you are just starting out on a given social media platform and are eyeing those users with tens of thousands of followers, it helps to understand that follower count isn’t any kind of guarantee. In fact, I’d say that if you hit 100 Twitter Followers and have been Listed 9 or 10 times, you are in some ways better off than if you had 10,000 Twitter Followers and have been Listed 500 times.

Do you use Twitter lists? Do you have the equivalent of a ‘Randoms’ Circle on G+?